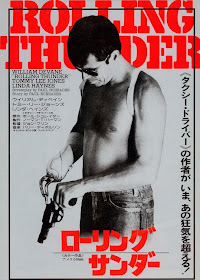 With promises of enlightening me with an all-American experience in vengeance and psychological trauma, Rolling Thunder pulls no strings in acquiring instant favoritism of all the films I've seen from the seventies. Starring William Devane and Tommy Lee Jones, Rolling Thunder is an absolute treat as I was expecting a trashy exploitative motion picture of relentless gun play in the name of several fallen souls. Could you imagine my surprise when the central whore character was martyred early on in front of the withdrawn Major Charles Rane by Brainscan director John Flynn? Besides from the pivotal and expected scene of retaliation towards his attackers, Rolling Thunder encompasses many American influences of hatred and gender prejudiced cinema. What is slowly unraveled over the entirety of the film is what First Blood could have been had the character of Rambo been written into the cold-blooded killer that he is in the Morrel novel of the same name and not the pacifistic pussy that Hollywood made him out to be. 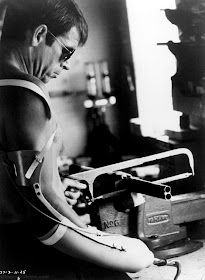 A prime element of Rolling Thunder in which dazzled me is the emotional crucifixion of the military spouse. Upon returning home from a POW camp after 7 long years of torture, Major Charles Rane greets his wife and child with eyes that reflect calm but hide a seething inferno behind his glasses. After the initial car ride home, a police officer named Cliff expresses curious sentiments with Major Rane's wife which is later revealed to be her secret lover since his capture. Instead of a sordid affair continuing or trying to patch up the relationship that died in the camp along with Major Rane, the creature known as Janet promptly tells him that Cliff and her are currently engaged and she refuses to call off their ceremonial coupling. After he silently sits on the same couch that he once comfortably sat on some years earlier, Janet becomes enraged with his dead eyes, goading him to present displeasure, as this is where the sluts derive their complacent ego from. This very facet of spousal abandonment reflects an age-old consistency not just in film, but based in and around reality as well. 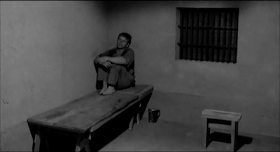 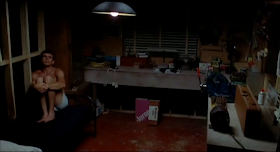 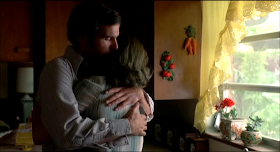 If you've paid attention to film then you will not be surprised with examples of a classic case involving a  callous woman removing a significant male from their life only to replace it with the next best thing, preferably with a steady source of income. a prime example of women objectifying men while shrieking vice versa: Dear John, Pearl Harbor, and Cast Away (a misdemeanor in this case). These are but a small handful which fit the bill. In contrast, the films in which men refuse to give up their idea of a sanctified reunion mark the same redundancy seen in cinema and the "real world." The biggest myth commonly regarded as fact is that women are more romantic than men. This assumption is ridiculous and insulting as one only can wonder how being needy has replaced the definition of true romance, giving it all and investing into a commitment and not shoes and blouses. But yet again, no one ever really expected anything from a military spouse other than trust, which very few reciprocate. Rolling Thunder just goes to show that "forever" means nothing to a whore. Hell, even B-rate international action films like Wasabi tend to the real nature of men with Jean Reno's insistence to pine over a woman who left him many years back. Fear X is another shining example; Nicholas Winding Refn's tale of a man refusing to let go of his past in hopes for new love and maintains a debilitating obsession with a woman who is now dead. To spring into more recent territory, John Carpenter's Prince of Darkness is another film concealing an obsessive love that is unknown to women. 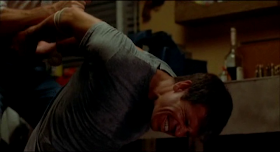 Also present are the themes of S&M and homoerotic tidbits scattered throughout. For example, the Texan constantly referring to Major Rane as a "macho motherfucker" and the slow spreading of lips to reveal teeth as the pain rolls right off of Rane's shell. Major Charles Rane refers to himself as "dead" throughout Rolling Thunder. Apparently all of his persona was squeezed out of him, forcefully, by the gooks that had him imprisoned for those seven years. In one of the most iconic scenes out of the film, Major Rane convinces Cliff to rope his hands behind his back and "pull it up in the air like you're gonna take me clear on up to the ceiling." After Cliff reveals to be noticeably troubled, Charles grunts "Higher, man, Higher! Till you hear the bones start to crack". This thesis on shell-of-a-man is frequently at work within Rolling Thunder. While one man would demonstrate a compromised behavioral approach to vengeance, Charles Rane doesn't seem to seek vengeance on a count of his family, rather, it's the appropriate, human, thing to do. One can argue that this very same notion is applied to Showtime's Dexter as Dexter Morgan was taught to flaunt emotion and actualize trigger responses. To quote Major Rane, "you learn to love the rope. That's how you beat them." 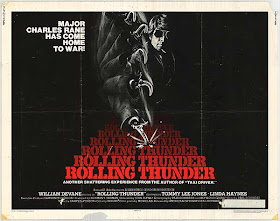 With a screenplay written by Taxi Driver's Paul Schrader, also director of Mishima: A Life in Four Chapters, Rolling Thunder dons many similarities with Taxi Driver as the common denominator is social decay and an unwillingness to the world. I've always been disinterested in the angst chronicles - the mediums that encapsulate post-Vietnam Americana and the "War = home" that near every film of this era is guilty of portraying. Better yet, Rolling Thunder, while taking the slogan of such, avoids making it a highlight of the film and would rather focus on annihilating Mexicans with merciless glee. In a later scene, my favorite, Charles Rane reunites with fellow soldier/prisoner Johnny Vodhen (Tommy Lee Jones) and tells him simply that he found who killed his son. Saying nothing more, Vohden replies that he will get his gear with a smile on his face and a purpose about him. Collecting his Winchester Model 1897 Shotgun, Vohden quietly bags it as they prepare to head out to a whorehouse located in Juarez. Upon arriving, both Vohden and Rane make it very clear that they both don't care who is injured in the upcoming shootout. Every Mexican character that was encountered in Rolling Thunder proves to be perverted degenerates; the sleazy folk who still hang onto the ideal of a Reconquista Mexican Texas. It's in this violent philosophy of exterminating the various Mestizo cockroaches that Rolling Thunder becomes one of the few films that wrap around the American virtues of crushing the weak and undeserving. 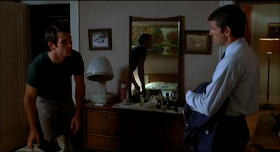 Rolling Thunder is single-handedly one of the most contemptuous movie experiences I've sat through as of recent. The silent pain barely expressed by Charles Rane is among one of the more powerful performances I've seen in a film. Rolling Thunder also aspires to be more classy than the average revenge film from the seventies. From the sheer violence left to the imagination and to Rane's unwillingness to love anything but his son, what is evident in Rolling Thunder is its fascinating portrait of an empty dead man. Major Charles Rane is a thousand times deeper than Paul Kersey and with his prosthetic hook-hand, more iconic as well. This Vietnam volume also ends perfectly, with Denny Brooks' "San Antone" filling the debris coated hallway as the two heroes return from another battlefield, one of which seems to purify and recapture the essence of life these soldiers had lost. Rolling Thunder is a goddamn masterpiece of wit and brutality and should be seen by every citizen of the U.S.A. This film will make you a better American, guaranteed.
-mAQ
Soiled Sinema at 3:20 PM